This project was spawned from the desire to have an easily portable source of power for many applications as well as for emergency use.

I first started this project back in 99 after seeing similar portable power setups that were self contained, yet small for most practical applications.  What I'm talking about are those battery booster/power supplies you see in hardware stores for like $100.  While the idea of these things is pretty good, the only problem I had with those things was that because the whole system was stored in a plastic case approximately the size of a car battery, that meant that the actual batteries inside the case were small.  And coupled with the 300w inverter that was usually built in the system, that all added up to a pretty short run time if you draw a full 300w from the inverter.


That's where my setup came into play.  By coupling a regular deep cycle battery with the inverter, in my case a 400w inverter, I'll have plenty of run time to do just about anything I want to within the limits of this system; even start a car, not just jump start it.  Of course since this system does incorporate a marine battery that weighs upwards of 50lbs, I had to come up with a wheeled platform to mount the thing on.  Thats where the 2-wheeled cargo cart came in.  I got the cart from an old job when I used it to carry my tool box and parts to job sites.  This cart would hold the battery box which in turn holds the board with the inverter and other hardware.

This setup has its own on board battery charger to recharge the battery wherever you take the system.  It always sucks to use some type of battery system in the field for something only to have to take it back home where your normal car battery charger resides in the corner of the garage, not with this system, wherever you take it, if theres an outlet or even access to some 12v solar panels, you've got the ability to recharge the power cart. 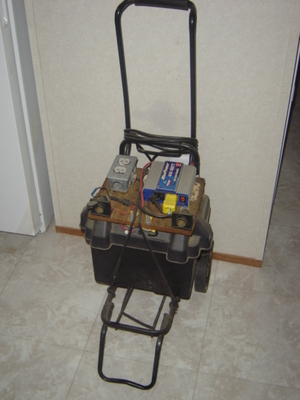 As mentioned before, this system has a 400w power inverter with a peak of 800w to allow you to do a number of things with it in the field like running mid sized power tools, among other things.  The setup has a twin outlet box next to the inverter to allow for normal plugging in of things.  Those two outlets on the inverter are in an awkward position when it comes to plugging different things up, such as AC adapters for cell phones, etc.  The board also has two 12v receptacles for plugging in 12v tools and appliances as well.  Finally to top it all off there are a couple of studs in the front of the board that all the wires are hooked up to, which serve as posts for clamping alligator clamps to for higher powered 12v items.  As you can see this thing is a very versatile tool.

The 12v outlets both have inline fuses protecting them, also the main line from the batteries is going through a high current inline circuit breaker to protect the whole system in case of a catastrophic failure.  A small toggle switch turns the system on and off.  The inverter obviously has its own fuse protection and on/off switch.

I put this tool to use recently when I was starting the storage shed project on our little lot when there was no power.  The power cart came through providing more than enough power to run my jig saw for the hours that I spent working on the shed, cutting 2x4's whenever I needed to.  I just plugged the charger up and the next morning the system was ready to go again.

This thing can definately be used for emergencies, running a table lamp and TV or radio.  Obviously you can't use this thing to run your large fridge or freezer, but when your house is dark, having a couple of table lamps burning and a radio or TV going beats sitting by candlelight or flashlight while its dead quiet.  Of course you can help with the future use of the system too by making your house more energy efficient in the first place.  If your lamps use CF bulbs instead of incandescent bulbs you can essentially light up a good amount of your house on this thing with the use of extension cords of course.  As you can imagine, the possibilities are endless as to the use of this tool. 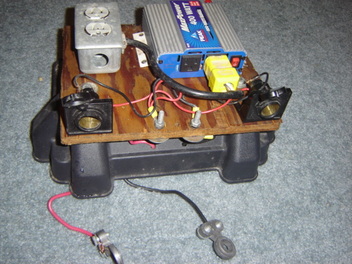 Inverter and outlets on board.

If you're interested in building one of these, you can purchase the plans for the power cart by clicking the link to take you to the Ebay ad page where the plans are listed or email me and we can set up a transaction.  The plans are a file that are emailed to you after payment is received so its real quick and painless.

If the thought of building your own power supply doesn't appeal to you, we will accommodate by providing you with products related to our showcase project.  Check these products out below.