This is one of our most important projects so far that we've managed to get done.  This handy device allows us to process seemingly useless WVO into a usable fuel for running any diesel engines we have around.  After studying a number of other biofuel processors that other people have constructed, as well as tried a couple of variants of some already existing processors, unsuccessfully I might add, I finally conjured up this design for a nice compact fuel processor that you can literally use in your living room with ease.

The one thing that I seen all the othe processors have in common was the idea that they were all huge!  They were usually centered around 55 gallon drums and were probably too large to move with one man.  Even the one we tried to mimic was kinda large, it used a 30 gallon trash can.  Our setup uses a single 5 gallon bucket to serve as the reservoir, while gravity feeding into a 1/2HP water pump which then pushes the oil through a house water filter that has a 2 micron filter in place to guarantee some good filtering.

The whole unit is about 3' high and weighs about 30-40 lbs.  As stated before, the processor is small enough that you can do all your fuel processing in your living room.  You just take your fuel can and stick the short length of garden hose into it and turn the switch on to start filling up.

Another thing thats convenient about this thing also is the idea that I get to use these strainer bowls that fit into any 5 gal bucket to allow me to prescreen the WVO before starting the processing.  This way I can prescreen the WVO, right into the reservoir where I mix in the petrol, then turn on the pump to filter the fuel.  Quick and easy!

A little history though.  I did try several designs.  The first design used a 12v utility pump, which started smoking when it tried to force the oil through the filter.  I tried one of those drill powered utility pumps, and that one just got up to a trickle.  I then tried a sump pump, which also only managed a trickle.  Last I tried the 1/2HP water pump that I'm using now, and that one couldn't even draw the oil up a few inches to push it through the filter.  I then tried inverting the input pipe upward and pouring oil in, only to have the pump draw the oil in and pop the pipes loose, since none of the PVC was glued.  That was when I realized that the best bet was to have a gravity feed system that would be totally glued up to hold the pressure that was sure to be created when the pump forced that oil into that filter.  Well, perserverance prevailed and we now have our biofuel processor that has been serving us well so far.

We are working on composing a manual to show anyone how to build this processor so they too can jump on the biofuel/WVO bandwagon and not have to dedicate a large section of the garage or backyard to an unsightly monstrosity of a processor that may be more of a problem than a solution. 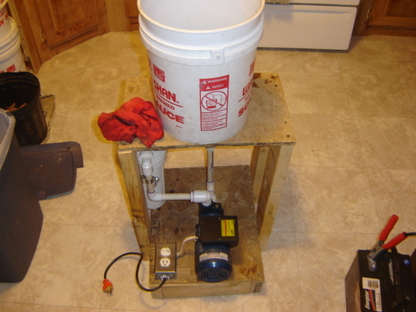 
After some testing and use, we discovered a few things about the components used in this apparatus, as well as ways to obviously improve the overall machine (like usual).

For one, the house water filters used in this machine have a flaw where when the oil is under extreme pressure, the oil tends to blow by the top and the bottom ends of the filter element, taking with it many of the contaminants, especially animal fat.  To remedy this we conjured up a simple sealing system using some more plumbing components so now the filter elements seal real good at the top and bottom, not allowing pressurized oil to pass through anywhere but the actual filter element.

The next modification was to add another filter housing, making this a two filter setup, and putting a 20 micron element in the first filter housing and a 2 or 5 micron filter element in the second filter housing.  This way the first filter will remove the heavy crap (fat) and the second filter will rid the oil of the remaining fine contaminants (spices, flour, etc).  The modifications were able to be done to the existing processor platform without adding any more material other than the extra filter itself.  Obviously, between the filter sealing and the second filter, the pump takes a little while longer to move 5 gallons of veggie diesel (even when thinned out), but that little extra time is better than producing a crap fuel that will do nothing but give you headaches down the road.

The unique thing about this processor too is the idea that under the pressure of the oil in the 5 gallon bucket above the PVC plumbing and filters, the oil will actually move through the filters with a little stream that will manage to fill a 5 gallon fuel can in about 5 hours give or take.  A common practice for us is to fill the processor up with oil and petrol every day and let it run, so by the time we need some fuel for the truck, it will be done through the power of gravity.  This will save power (especially since we will be going off grid soon enough) and will prolong the life of all the components of the processor.

This fuel processor will now be at the forefront of our biofuel projects, since we got the processor going, we can now make all the fuel we need to power everything from the diesel generator to any of the vehicles we plan on building/converting.  Stay tuned for more of our biofuel exploits. 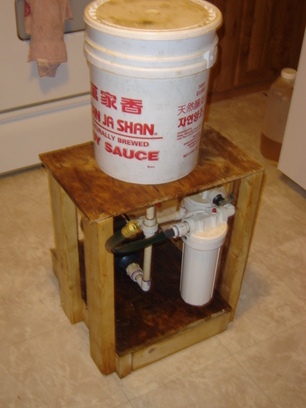 More products that may interest you if you're interested in further pursuing the use of waste veggie oil/biodiesel for your alternative energy goals.