New for the firearms section of The Improvisation Center website will be reviews on certain firearms that we feel have a very useful place in any prepper's "tool" box.  We won't go into battle guns or so called "assault" weapons because it seems like everybody and their brother grabs these.  We're looking at guns that have a more utilitarian purpose other than obliterating multiple targets.  Not that there's no place for such weapons in a prepper's arsenal, but we're focusing on the general survival aspect of firearms.

The review on firearms is on my Riverside Arms single shot 12 gauge shotgun.  This latest acquisition was also picked up at a gun show for a low price.  It looked kinda rough but was still functional for a gun that was apparently made in 1913, or at least thats what the patent stamp on the barrel says.  I had some plans for this gun too.

The gun had something like a 28" barrel, which was ridiculously long by my standards.  While this would make the gun good for popping flying birds or maybe sending buckshot out to ranges beyond what a shotgun would normally be used for, in my line of interests, a super long barreled shotgun won't work.  So the first thing I did was lop down the barrel of the shotgun to 19", which is an inch more than the legal length.

At first I thought about shortening the stock a little while still keeping the overall length legal, but then after thinking about it I left it alone for the simple fact that after taking a few test shots with the thing and finding that it kicked like a mule on steroids, I determined that a short stock will only make this thing inconvenient to use.

The next thing that I noticed about this gun when I disassembled it was that it had a spring loaded ejector that launches spent shells out upon opening.  The only problem was that the sliver of metal inside the receiver that catches the ejector lever was worn completely away.  In order to remedy this problem I drilled a hole in the side where the sliver of metal used to be and put a small screw in place, then took my dremel rotary tool and ground it down to where the barrel will still close properly.  With that little patch, the shotgun is now able to launch shells out after opening, making it a quick reloading field gun.

The last addition to this gun was a sling, so I can carry this gun on my back when in the field.  I bought one of those sling kits from Walmart and attached the loop bolts in their respective locations fore and aft and hooked the sling up.  Because the forestock merely snaps in place versus bolting in place, I had to use a wire tie to further secure the forestock to the barrel so it won't pull loose when the gun is hanging from my back. 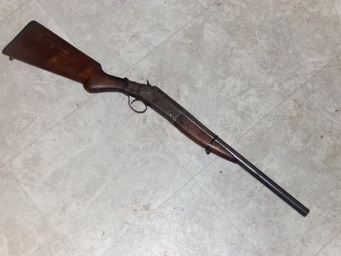 While I had a good time practice shooting this shotgun with the different shells, the main reason for getting this shotgun was so I can use it with the different 12 gauge adapters available that allow you to shoot different pistol and smaller shotgun cartridges.  The adapters are typically in the $20 ish range and come in a wide range of calibers.  My plan was to get every adapter thats available, which would then effectively turn this simple shotgun into many guns.

The cartridge adapters available are .22 LR, 9mm, 357/38 spl, 45 acp, 44 mag/spl, 410/ 45 LC, 20 GA, and even 16 and 28 GA in older models.  It wouldn't matter what ammo you run across, you can still be in the game with these adapters and a simple single shot or double barrel shotgun.  While pump or other magazine guns can still use these adapters, its more of a pain to reload fast when you gotta cycle out the adapter, reload the pistol cartridge, then load the adapter into the magazine and cycle the action to chamber the adapter.  With the single/double, just break the barrel, put the adapter in and close, cock the hammer if open hammered, and shoot.

Another thing about the adapters too is that depending on the manufacturer, you can get pistol cartridge adapters with rifled barrels in them for increased accuracy.  One manufacturer even makes two adapters, one in .22 LR and one in 9mm, in a 9" length insert specifically for break action shotguns where the barrel is rifled, effectively turning the shotgun into an accurate long range pistol caliber rifle.

While I dont have all the adapters yet, I already have the 9mm, 357, and 45 acp adapters.  I have pistols in the first two calibers, but didn't have any pistols in the 45 acp, but had plenty of shells after I did have one gun a while back that I ended up selling after I couldn't get it to work right.  This shotgun along with the adapters would make a good bug out gun as you would be able to shoot whatever ammo you can acquire based on the adapters you have.  Under some circumstances, this would probably be one of the only guns I would take with me if I could only take one gun, just because of this versatility.