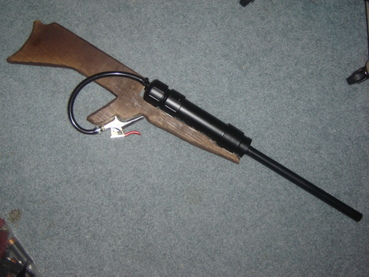 This is the complete spud gun.  Note how the gun assembly, made of PVC, is mounted on top of the wood stock.  The stock is made with a pistol grip for a more comfortable feel.  The blowgun nozzle is glued to the pistol grip, which has been cut to the contours of the nozzle to make for a nicer fit.  The gun assembly and blowgun nozzle were glued in place on the stock with epoxy glue.


This is the rubberized PVC disc that makes up the diaphragm valve in the gun.  The barrel of the gun extends into the air chamber and goes to the back of the gun where the PVC disc is glued in place.  The disc is pressed against the breech of the barrel in its normal position, which helps seal the air chamber.


The diaphragm valve is a pretty common setup in the world of spud guns.  Its cheap, simple, and very effective.  Unlike some of the pricy valve setups, like modified sprinkler valves, and the complex valves, like piston valves, the diaphragm valve is easy to do, with very little in the way of mishaps.  Any spud gun made with a diaphragm valve tends to be more powerful than a simple ball valve spud gun since the valve opens and releases more air in a shorter amount of time.

Plans for this model of spud gun are available through Amazon.com in Kindle format, just click on the link below to take you to the listing in order to purchase.

Here's some more related products that may pique your interest.