We just recently picked up another little project along with the beach cat, from the same dude that owned the boat as a matter of fact, and that is an old 3 wheeler ATV.  This little vehicle is one of those blast from the past toys that many may remember from back when ATV's were really just getting a foothold in the recreational markets.  These vehicles are lightweight, not much to them since there is no complex tie rod/independent wheel suspension on the front, just a simple fork and a wheel while you have the engine/gearbox hooked up with a simple gearing to the rear axle.

The previous owner had used this ATV as a deer hunting tool, having modified it with a rear mounted rack that was homebuilt and welded to the rear of the ATV's frame to facilitate carrying anything one may need to carry, making this a true utility vehicle.  The only things we really have to do is just get the vehicle running again which shouldn't be much as the ATV has a new carb on it and the engine still turns over.  The only other things that I would really want to do to the machine would be to find another seat for it and maybe shoot some paint on the cargo rack.  I could also do some minor patching on the plastic fenders and even shoot a little paint on them and the fuel tank if I just felt compelled at some point.  Until then we will work on getting the machine up and running and driving before the cosmetics come into play. 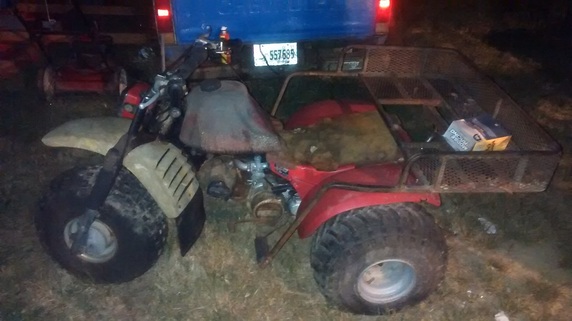 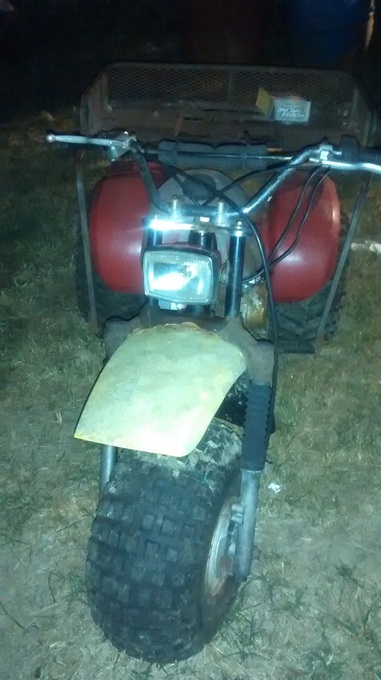 The first thing I had to do when I started messing with the engine was to clear out the air passage to the carburetor which had some junk from dirt daubers and other critters in place.  The fuel lines were a little dry rotted so after breaking small pieces of the lines where they attached to the carburetor and the fuel tank I ended up having to remove the tank to suspend it in a way to allow for fuel to transfer down to the engine.  With some gasoline sprayed into the throat of the carb the engine was able to start up but would not stay running due to some clogging in the carburetor.  I ended up removing the carb to clean it out which didn't take long and after reassembly, was able to get the engine to start up and stay running on its own.  All that was required at this point was a little fine tuning to get the thing to be able to hold something of an idle or otherwise stay running.

Afterward I replaced the old fuel lines and fuel filter with fresh hardware from Auto Zone then remounted the fuel tank.  The engine is now able to start up pretty fast but one thing is the engine seems to prefer having the choke 75% closed in order to stay running pretty well.  This was no big deal, at least the ATV is running.  The next thing was to take a little test run but I had to check the brakes to see how they are.

The front brake cable was not solid anymore so there was no real chance of having a working front brake.  I did a slight test of the machine to find that the rear brake didn't grab for anything either, even with the foot pedal.  The hand lever for the rear brake also wasn't functional.  Further examination after unsuccessful attempts at adjusting the rear brakes found the brake shoes were completely void of brake material so these brakes weren't going to be grabbing under any circumstance. 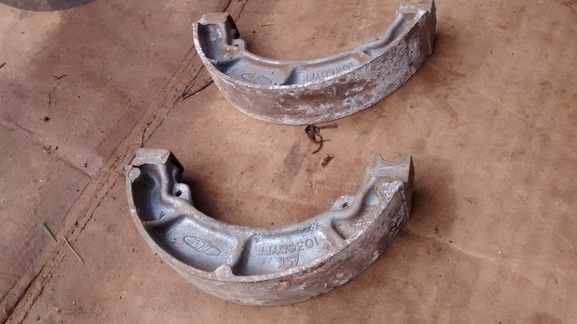 With the need for brakes apparent I ended up going to one of my favorite sources for cheap parts, Ebay.  I ended up finding a pair of brake shoes for less than $20 with shipping so obviously I made the order and had the parts in a little over a week.  After putting the brake shoes on, I had to make several adjustments as I test rode the ATV so I can get a decent grab on the brakes while still being able to drive around.  So far the brakes grab well enough to stop but I'm not fully ready to just open this thing up in order to try the brakes.  This is a 3 wheeler after all and these things are more than capable of turning over.

The next order of business will be the cosmetic aspects of the ATV.  I have to put a new seat on the machine, sand and paint the fuel tank, fix some cracks in the plastic fenders and paint all of those as well, and to make the brakes even more promising, fix the handbrake cables so I can have operation of the front brake as well as handbrake operation of the rear brake too.  Again Ebay has come through with providing those parts for a low price.  While I haven't gotten the parts yet, they are on watch so I can get them when I'm ready to continue. 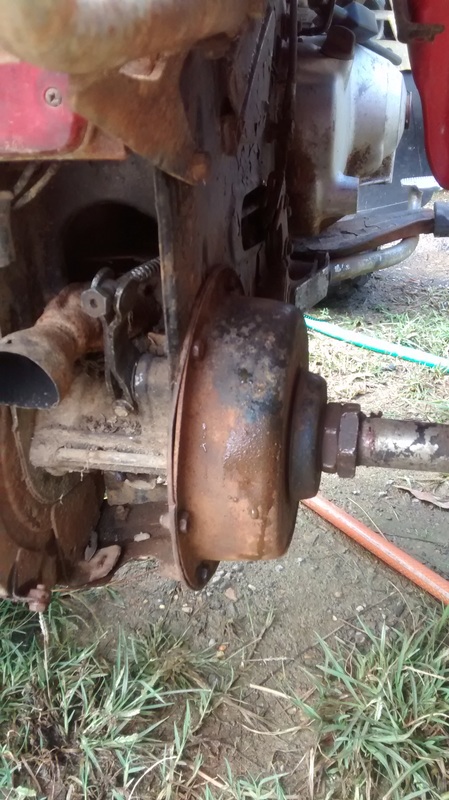