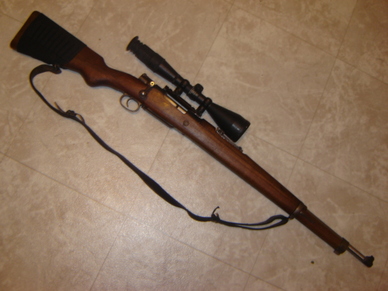 This rifle project came about from another one of my antique mausers that I did some work to.  This gun, contrary to my preferred interest in scout rifles, is to be my long range hunter, which I will use for future deer hunting, teamed up with a long range Russian scope and the 22 inch long .308 barrel.


This rifle started off its life as an 1893 Turkish Mauser rifle that was chambered in 8mm Mauser caliber and had the classic straight bolt abomination that plagues these nice old rifles.  While I don't have any real problems with the 8mm caliber cartridge, just like the 7mm cartridge that my 1895 Chilean Mauser was chambered in, boxer primed shells are pricey and sometimes hard to come by.  And frankly I hate using surplus ammo for the reason that I cant reload it.  Sucks that in the US there isn't a supplier for berdan primers, doesn't make sense that one can still find primer removal tools however.

Anyway, due to that little technicality, this rifle was going to undergo some changes.  The first change was going to be the changing of the barrel.  I managed to find a small ring mauser .308 barrel on Gunbroker.com for $100 so I grabbed it fast.  I took the gun and barrel to a local gunsmith and he worked his magic so now the action had a .308 barrel instead of the 8mm Mauser barrel.

After cutting down the stock, I had to sand out the barrel channel to accomodate the tapered barrel.  That didn't take long with the good ole Dremel tool and some sanding wheels.  I was then able to assemble the rifle with the original stock, including the barrel shield, since there was no rear sight to deal with.  Of course there was that straight bolt to deal with, and again, no sights whatsoever.

The next little dilemma was with the bolt, it had a problem with having a tight fit.  I had to grind down little spots on the bolt in order to help the bolt move smoothly in the receiver.  After getting around that dilemma, next was that stinkin' bolt.  Another trip to Gunbroker.com and I located one of those ATI bent bolt conversion kits for $14.  Perfect, just what I was looking for.  So after getting that thing, I went to work cutting the straight bolt handle off and drilling the hole with my drill press and tapping the hole out with the bits in the kit.  After that I took some good ole JB weld and mixed up a little batch and smeared it on the stub of the bolt handle and the bent bolt mounting point as well as on the threads of the hex keyed bolt that came with the kit.  I assembled everything and made sure the handle was straight and let it set overnight.  At that point I had my bent bolt.

Next I decided to put some sights on this gun just for the sake of having them on the gun in case I wanted to use the gun with open sights.  So, again back to Gunbroker.com and I managed to find a set of sights for $10.  The front sight wasn't going to be much of a problem since all I'll have to do is trim the muzzle down enough to fit the sight, but the rear sight was going to have to be butchered to fit it onto the tapered barrel, which will obviously be done with, you guessed it, JB WELD!!  Well after an hour of die grinding, I had the sights JB welded onto the barrel, and adjusted through line of sight as best as I could, I'll see how they work the next day when I fire some test rounds.

After the JB weld cured, I reassembled the rifle and shot a few test rounds, and surprisingly, the sights were on target pretty straight!  I was happy that I had the completed base rifle, open sights, bent bolt and all, ready for the final step. 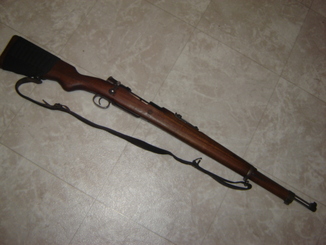 Base Mauser with bent bolt and sights

Well now that I have the base rifle all done and shooting straight, I can now start the scope mounting procedure.  There aren't exactly a lot of scope mounts out there for small ring Mauser rifles so in the true art of improvisation, I improvised.  I picked up a scope rail at a local gun show, that was for a TC rifle, I think.  Who knows, who cares, it was going to be used on this Mauser.  The scope rail was long enough to span the gap over the magazine well and had two bolt holes in the front where I can secure the rail to the front of the receiver.  At this point I was going to have to drill and tap a couple of holes in the front top of the receiver in order to put the screws in place tohold the rail down.

I lined up the rail as best as possible and marked its future spot with a sharpie, including where to start the holes.  I tapped a couple of starter holes with a punch and commenced to drilling out the two holes.  I then tapped the holes and went on to the next step. 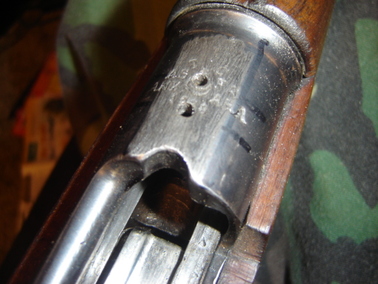 Two holes drilled & tapped in receiver, note bluing has been sanded off

The next thing I had to do was grind away some of the bolt release lever on the left side of the rear of the receiver.  This lever curved up over the top of the receiver and was in the way of where the scope rail will be going.  Grinding this down wasn't going to hurt anything, just make it a TAD bit harder to work the lever to remove the bolt for cleaning.  A good fingernail or a spent casing to hook into the lever will work to pull the lever out.  I took the die grinder and cut about 3/16" of the tip of the lever to make it clear the scope rail. 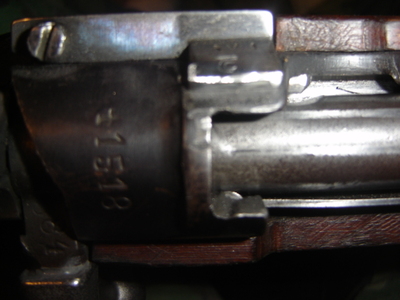 Now at this point it was time for the scope rail.  I ended up sanding down the spot on the rear of the receiver right behind the stripper clip groove to get the bluing off, just like I did over the two holes.  Reason for that was to help the JB weld adhere more effectively to the metal.  I applied JB weld to the bare metal in the rear and front of the receiver and put the scope rail down on the glue then screwed the screws in place and made sure everything is straight before setting the rifle aside to allow the JB weld to cure. 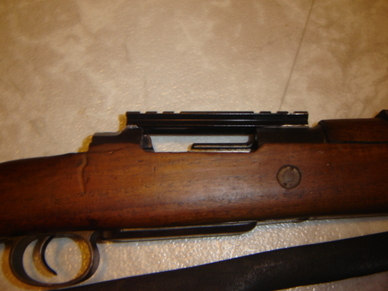 Now the last thing is to mount the scope onto the rail.  The scope already had rings in place from its previous use on another rifle.  After allowing the JB weld to cure overnight, I mounted the scope in place and sighted it in with the grid boresighter.  I then took the rifle out to my makeshift range and took a few test shots.  At about 50 yards (does this type of setup no real justice) the first shot landed on its mark.  My shaking hands didn't allow me to land more hits, but successive tests will probably change that, with a secure place to set the rifle.  Well, for now we have our finished hunter Mauser, all done, ready for more tests in the future. 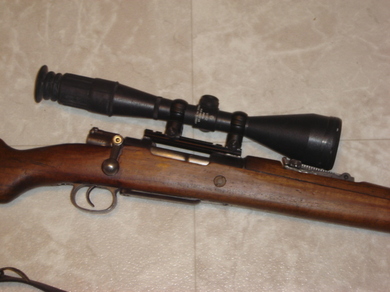